Members of the Gloomgärde that braved the Sunken Vessel. Flower played by John.

Flower trained (level 2) and donated 10 gold to the Sanctuary. Mürus simply shrugged at the idea of donating coins. 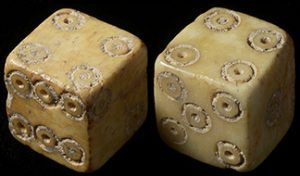 Relaxing for the evening at the Sleeping Lion, a shifty-looking man approaches you, hand outstretched. In it are a pair of pale dice with crude marks scratched on them.

“Greetings, friends. You look like you could stand to liven things up a bit. Care for a quick game of bone dice with me? I’m sure we could make it interesting.” His other hand pats a coin purse at his side.

We decide to [p]lay a game with the man. It may prove to be a good time.

You get into the game but after a few rounds, your enthusiasm wanes as the man displays a streak of luck that can only be described as “uncanny.” You leave the table empty-handed. (Lose 5 gold each).

Only after the scenario did we realize that we should not have taken a road card as the scenario is linked with Gloomhaven. Oops. So narratively, we’ll say we stopped on some island along the way.

You are feeling a tad hungry as you walk down the road. You are considering stopping for a meal when you come across a thicket of bushes covered in red berries.

The berries look delicious, but you hesitate. They could be poisonous.

“What’s the harm in trying them?” Mürus suggests.

You shrug and grab a handful of berries to stuff in your mouth. They are incredibly sweet and just the right amount of tart. You couldn’t feel better about your decision. That is, until you start vomiting. Your stomach is incredibly unhappy with you, and the situation doesn’t improve much by the time you arrive at your destination. (All start the scenario with POISON). 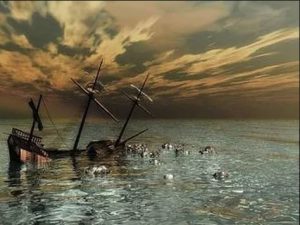 You clutch the faded map to your chest as if it were a blanket protecting you from the strong northern winds. You’ve been sailing your small rented ship along the coast for what feels like ages, looking for this forgotten shipwreck. Maybe if you hold the map closer, that will make its charts and figures more accurate and decipherable.

With little hope remaining, you finally catch a glimpse of a foreboding island on the horizon. As it gets closer, you see the definite outline of a battered ship pinioned against the island’s shoals, half sunk and barely held together.

You sail around to the far side of the island, where a remote and inviting beach allows for safer anchoring. The thought of what treasure awaits you onboard the ship now warms you against the wind, but your thoughts also turn toward what dangers might be guarding it. As your dinghy makes its way to the shore, you see a school of Lurkers rise up from the surf to greet you. Who knows how long they’ve been following your ship from the depths, waiting for the opportune time to strike?

Mürus & Flower take no time to squash the Lurkers and blast the Frost Demon. The Living Spirits proved somewhat of a challenge, but were eventually defeated.

The spirits seem calm and the Lurkers have retreated. You have looted what you can from the ship and are very eager to sail back to Gloomhaven to get your feet onto warm, dry land.

You take one last look at the strange island and its impaled ship, then do exactly that.

Flower grabbed the treasure – a magical compass that allows her to force enemies to move where she bids!