Members of the Gloomgärde that braved the Ruinous Crypt. Flower played by John.

On a trip to the New Market, you see a curious sea chart prominently displayed in a Valrath merchant’s stall.

“Ah, I see this interests you! he says while holding it up, taking great care not to damag eit. “I’ve been told this map will lead you to a location of untold riches! Wondrous beyond anything you have seen before!”

The Valrath gestures grandly with his free hand and his smile grows wide. “How can you say no to this? Just make me an offer.”

The Gloomgärde decides to make an offer and pays 20 gold.

After some amount of haggling back and forth, you settle on a price and pay for the map. You recognize some of the landmarks and should be able to find this place of “untold treasure” by hiring a ship. (Unlock #93 “Sunken Vessel”)

As you walk down a dirt path, you see a hard-looking mercenary sitting in a patch of grass. He nods as you pass.

“Hey, friends,” he says. There is something off about his tone, though.

“I don’t suppose one of you might be willing to part with a stamina potion, would you? I’m heading toward Gloomhaven, but I’ve just come such a long way, and I’m no tfeeling too good about the stretch I have left.”

With the clank of his sword sheath against his armor and a loud groan, the man stands up. “I’ll pay you well for it.”

No one in the Gloomgärde has a Stamina Potion to sell the man.

There was something off-putting about that man. You are more than happy to move along and put some distance between you. 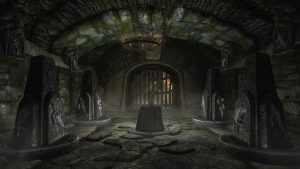 Your mission is clear. These elemental cultists are distorting the fabric of the world and must be stopped. With that goal in mind, you follow the writings to an ancient crypt you believe to be the cult’s base of operations. Steeling yourselves for combat, you batter through the rotted door and charge into the hall of the crypt.

The sight before you is both wondrous and horrifying. A group of cultists is performing ritual incantations in front of a black, gaping hole in reality. They turn toward you and snarl, unsheathing their sacrificial daggers. Behind them an inky darkness spills forth from the hole and coalesces into nightmarish forms full of teeth and claws. You know you must send these terrors of the elemental plane back into the void, but you are paralyzed with fear.

With the cultists and their minions dead, it seems the dark rift is now dormant. It is no less disconcerting, however. You toss a rock at it, and the rock disappears into nothingness. You must admit that you wonder whether you could enter the rift yourself and whether you could survive the trip to wherever that rock ended up.

Alternately, finding some way to close the rift is probably the more prudent decision. There is an Aesther enchanter in Gloomhaven who may know more about this inter-planar stuff. She’s been known to ask for impossible favors before she helps anyone, though.