The Barrow Lair took more than a few attempts. Mürus tried it at least once with his only friend, Ingen. He really wanted to bring along Flower, but something about it being too late kept her from joining. Not able to defeat the enemies in the lair with Ingen, Mürus later ran into an Inox Brute named Flarl and a Human Scoundrel named Sashala. They begrudgingly let Mürus join them to finally succeed where Mürus and Ingen could not. 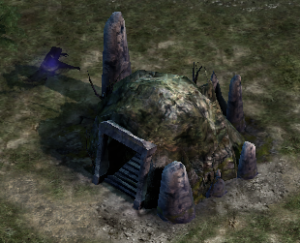 The stench of death and rotting flesh gets thicker as you kick past the corpses of your foes and head deeper into the underground burial site. Guided by the muffled sounds of conversation, you find your way through the maze of crypts and burst into a small room full of hard-faced bandits, all with bows at the ready.

They’re clearly guarding something. You must be in the right place.

We clearly didn’t belong and some ancient curse was beset upon us when we entered (add three CURSE cards to each character’s attack modifier deck).

Two archers were quickly dispatched and we walked right around the poorly placed traps and opened the door to the Barrow Lair. Idiots.

You open the door to a large crypt littered with coffins. At the back stands your quarry. He fits the description, but there is something previously unnoticed in his eyes—a dark otherworldly force.

“Who are you to think you can interrupt the work of the Gloom?” A dark energy engulfs his hands as he speaks. “I will show you what you are dealing with!”

The Bandit Commander then began running around frantically unlocking doors to let loose these foul, bloated living corpses. They moved slow, but they packed a punch if they caught up to you.

Finally, with the help of Flarl & Sashala, Mürus was able to kill the Bandit Commander and the undead creatures.

Sifting through the carnage left by the battle, you find a cache at the back of the room containing the scrolls you were hired to collect. You can’t help but rifle through them a bit, but find that the writing upon them is in some unknown archaic language. One thing that does jump out at you, however, is
a map of the northern countryside. A bend in the Still River is clearly marked as a point of interest. Contemplating whether you want to find out more about this so-called “Gloom,” you decide that the spot could be a point of interest for you, as well.

But that can be forgotten for the moment. You pack up the papers and head back to Gloomhaven to collect your reward.

Meeting Jekserah once again at the Sleeping Lion, you hand over the papers and are paid the agreed-upon amount. Ten 10 gold each!

“You know,” she whispers to you softly under the bustle of the tavern. “If you’re interested, I may have another job for you. A tribe of Inox in the Dagger Forest has ransacked a couple of my caravans headed to the Capital.

“I told the militia, but they do nothing,” she spits. “I can point you in the direction of their encampment. If you can make an example of them, I will pay you even more.”

She places a crude map of the forest on the table and stands up, her jewelry clinking with the movement. “Come find me when it is done.

Flarl refuses to ‘make an example’ of the Inox and suggests the group go investigate the bend in the Still River. Mürus shrugs as he is thrilled to be going anywhere with anyone, considering Flower is probably too busy and he certainly doesn’t want to invite Ingen to go exploring again.