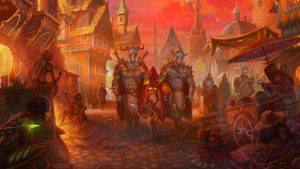 Flower purchases an Invisibility Cloak and a Minor Power Potion.

The Road to The Black Barrow

Walking along the edge of a forest, you begin to hear strange, unfamiliar sounds coming from beyond the trees. You stop and listen closer.

There’s a rhythm to the sounds, and with that established, you begin to pick out different human voices in the mix. You’d venture to say that the noise vaguely sounds like chanting.

Without a second thought, you get back onto the main road and continue moving toward your destination.

The hill is easy enough to find—a short journey past the New Market Gate and you see it jutting out on the edge of the Corpsewood, looking like a rat under a rug. Moving closer you see the mound is formed from a black earth. Its small, overgrown entrance presents a worn set of stone stairs leading down into the darkness.

As you descend, you gratefully notice light emanating from below. Unfortunately, the light is accompanied by the unmistakable stench of death. You contemplate what kind of thieves would make their camp in such a horrid place as you reach the bottom of the steps. Here you find your answer—a rough group of cutthroats who don’t seem to have taken very kindly to your sudden appearance.One in the back matches the description of your quarry.

“Take care of these unfortunates,” he says, backing out of the room. You can vaguely make out his silhouette as he retreats down a hallway and through a door to his left.

“Well, it’s not every day we get people stupid enough to hand-deliver their valuables to us,” grins one of the larger bandits, unsheathing a rusty blade. “We’ll be killing you now.”

Joke’s on them. If you had any valuables, you probably wouldn’t be down here in the first place.

Kicking through the door, you find yourself face-to-face with the reason these bandits chose this particular hole to nest in: animate bones—unholy abominations of necromantic power.

Nothing more to do but lay them to rest along with the remainder of this troublesome rabble. 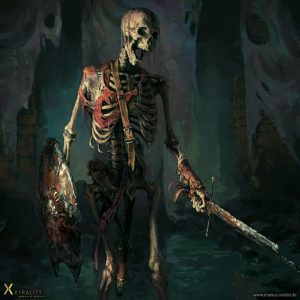 Mürus & Flower fail to defeat 2 living bones and 2 archers and fail to complete the scenario.

In a later (solo) play, Mürus & Ingen defeat 2 living bones and 2 archers and complete the scenario.

With the last bandit dead, you take a moment to catch your breath and steel yourself against the visions of living remains ripping at your flesh. Your target is not among the dead, and you shudder to think what horrors still await you in the catacombs below.