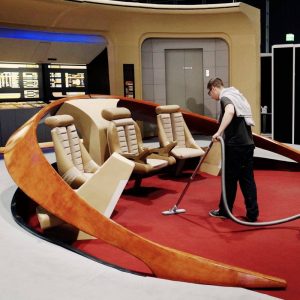 Ensign Norbert of the USS Enterprise

Little was known about Ensign Norbert, but those carpets were always spotless aboard the USS Enterprise.

“You might think the carpets clean themselves with some transporter technology whisking away the dirt, or maybe some sort of Altonian photon beam calibrated just to blast away the filth from everything that gets tracked in here when Commander Riker returns from some ‘away mission,'” the ensign in his physical prime shouts over the noise of the 52-year old Heisenberg Magnaspanner 3000 vaccuum.

“Nope, just me getting up at o-three-hundred before the crew returns to the bridge to boldly go where no one has gone before.”

“I’ll tell you, Ensign Becker never vaccuums behind Commander Riker’s chair. It’s like the final frontier back here and I’m the only one boldly going where no one has gone before,” Norbert expertly manuevers the crests and valleys under Riker’s chair with the machine he has written on in bold letters, ‘USS Liberator.’

“Coulda been a pilot, but I like the solitude of this job,” Norbert briefly stops to replace the Dermatiraelian subpace coils in the Liberator with an unparalleled grace.

“No one giving me orders. No one pointing a phaser at me…” Norbert re-engages the Liberator and the crescendo of the psilosynine-core drowns him out as he continues listing off the many perks of the job.

With the cleaning done and the carpet fibers all aligned as to not distract from the important work done on the bridge, Ensign Norbert nods in satisfaction as he looks at his time resonator.

“They’ll be arriving shortly to explore new worlds and such. This ship, all 42 decks, doesn’t clean itself,” Norbert wraps the USS Liberator under his arms and heads onto the turbolift.

As the turbolift doors close, Norbert holds a thumb up and recites the mantra his mother taught him so many years ago, “make it so, Norbert, make it so.”