Worthington Park is beautiful this time of year. The wind carries a calm breeze through the lush leaves of hundred year old trees. Graham lays in the grass only half reading one of the books on economics his father gifted him as a college graduation present. The interview he is sure to pass no matter how he answers starts in twenty minutes, on the 46th floor of his father’s building. Graham mindlessly reads the words that he should be regurgitating to his father’s lackeys, when his phone gives a warning. Others’ cell phones around him sound warnings too.

This is an emergency broadcast. Take shelter immediately. Lock and bar your doors. Secure fresh water and non-perishable food as help may not…

A bright flash from the heart of Sacaton City is followed by what sounds like an explosion. Graham checks his phone to see what the hell is going on, but there is no service – just the muted emergency warning flashing on his screen.

People start to panic and begin running out of the park. Graham grabs his bicycle and begins pedaling off when a nearby older woman stumbles in the panic, crying out in pain as she grasps at her ankle.

“Shit,” thinks Graham, “isn’t anyone going to help this woman?”

Graham helps the woman to her feet but her ankle is already swollen so he helps her onto his bicycle and helps her along out of the park.

The woman explains that she needs to find her son who works at a nearby restaurant just down the street. Graham agrees to help her get there.

Graham and, who introduced herself as, Mrs. Campbell move as quickly as they could to her son, Theo Campbell’s place of work.

“Oh my, that’s my car,” Mrs. Campbell points towards a wrecked car in front of the restaurant’s patio, “Theo must’ve gotten in an accident.”

Just then a door busts open from the restaurant and three restaurant employees come screaming out of the door, one looking frantically over her shoulder at the building behind them. A boom comes from within the kitchen and the restaurant bursts into flames.

Mrs. Campbell’s mouth goes agape and she points silently at the rising figures only a few feet away. 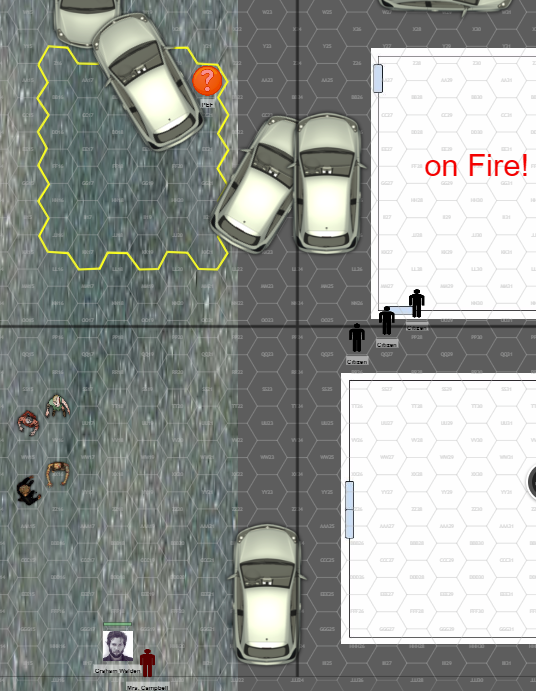 “What is wrong with them?” Mrs. Campbell asks Graham as if he would know anything more.

Graham grabs the handlebars of the bicycle with Mrs. Graham riding and pulls her behind a nearby car to hide.

The cook, server, and bus-boy freeze at the sight of the rising figures unsure whether to run into the back alley, back into the burning building, or past the figures. The figures turn towards the three and lurch forward.

Paralyzed with doubt or fear, the three simply hold their hands up in defense as they are swarmed. The cook is immediately pulled down by four of the lurching figures. Blood curdling screams echo through the streets. The server cowers in fear while the bus-boy lends no hand to either of his coworkers and runs out of the alleyway.

As quickly and quietly as he can, Graham rustles through the nearby car to find some sort of weapon.

Digging in the trunk he takes out the tire iron and whispers, “you really think your son is still in there?”

As they turn back towards the restaurant, the bus-boy dashes out of the alley and knocks Mrs. Campbell off of the bicycle and onto the ground with a thud before turning the corner out of sight. The middle-aged Mrs. Campbell takes a few moments to get back on the bicycle after the hard fall.

“Look Mrs. Campbell, why don’t you stay here, I’ll go look for your son,” Graham takes a wide angle towards the Campbell’s car far from the grisly scene in the alleyway.

The cook’s screams stop, but not the munching and slurping sounds of those feasting upon his corpse. Two other crazed figures spot Graham from far and over Mrs. Campbell’s car. Graham takes a quick peak into the car and sees two people hurt from the wreck. One wearing a fancy name-tag with the name “Theo.” The two inside the car are just now realizing what happened and look up at Graham approaching the car as well as two crazed figures nearing on the opposite side. 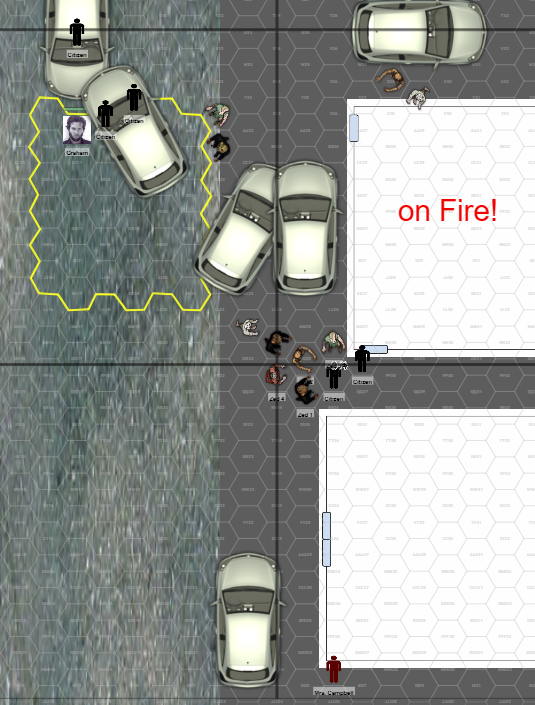 With the figures busy munching on the cook, the server runs further down the alleyway and out of sight.

“Get outta there and come on!” Graham sharply yells at the two in the car.

The two servers at the Alligator Tuxedo Restaurant, Theo and Cameron, don’t hesitate to get out of the car at the sight of two crazed figures lurching towards them.

“Go that way,” Graham motions the two towards Mrs. Campbell.

Fortunately, Theo sees his mother and begins running that direction, but so does everyone else on the block! The feast upon the cook is cut short as a newer fresher meal is spotted.

The crazed things charge Mrs. Campbell but Theo makes a beeline towards his mother. One of the thing reaches out for her, but Theo grabs it by its head and twists – hard. Bones crack. It slumps to the ground, motionless.

Other of the things continue forward, but with three young men aiding Mrs. Campbell, they easily outrun them.

“If what they’re saying is true, we ought to stop in the Build-It Big cause I think we’re going to need some supplies,” Theo suggests.

Graham looks south on 52nd Street towards the Build-It Big Superstore and then back North towards his apartment, “Look, I’ll go with you to stock up, but I’m not sure I can go much further before heading on my own way.”

The four agree to check out the Build-It Big Superstore for supplies.